Women. I paint them, sculpt them, still trying to understand them. Which is funny as I am one myself. But I think that is the beauty of us, the ladies. As we are all different, there is always another way, another view, another perspective on how the world works or feels. But one thing that has always been clear is the strength of a woman. Whether used as a chain of guilt or as the wind to soar, that is a tagline that has followed womanhood.

So, an idea came to me after feeding off social media about this year’s women’s day and how women helping women kept coming up and the process to move beyond breaking the glass ceiling. it was my version of women working together to make the world a better place. Yes, it may seem a bit sappy, but I do believe that we would get there, hopefully in my time. And luckily for me, I got a 20″ by 20″ canvas during one of my earlier art supplies runs to Michael’s so I started working immediately.

After making a quick sketch and some extra touch ups on how to make my piece, I got to work. I drew out the shape of canvas first on a cardboard then drew out the designs I wanted and cut them out differently. I wanted to have 6 forms, all different shapes but still similar in form. These forms are the bases of my armatures which I added jewelry wire to give them necks. Then I covered my armatures with paperclay I made using Jonni Good’s recipe, also giving each of them different designs all over before they dried.

I was really happy with how they all turned out. Though similar in form, I wanted each of them to still have a uniqueness to them. I wanted to show women that dance to their own beat or flow according to their course.

Also had a little photoshoot with them as well.

And while the women dried, I worked on the centre of my piece, the earth. 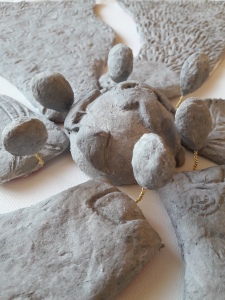 One feature I wanted to add was how Waja women from Gombe state carry their wares. They carry it on their shoulders, not on their heads as other ethnic groups do. Truthfully, I thought it was just the Gbagyi women of Abuja that carried their wares that way. So it was a pleasant surprise hearing that Waja women did this too. From what I heard, it is because the head carried the weight of wisdom so the shoulder helps in carrying the weight of materialistic things. And in a way, it seems like that is how women seem to be. They carry the weight of the world on their shoulders.

I wanted this to be a piece that reflects the innate power of women. There is a reason why if new ideas are going to be implemented in a society, women are targeted. Women are usually the carriers and enforcers of societal rules and values because they are seen as the caregivers of the next generation. It is probably one of the reasons why women that are different are often feared, ostracized and in some cases, killed because of the control they wield over change.

Once all the pieces were dried and painted, I arranged and glued them on the already painted canvas and allowed them to dry as well.

I am happy with this piece. I can see it gracing the walls of an influencer of the world Like Chimamanda Ngozi Adichie or the cozy santuary of a home maker. To me, it showed how different every woman is but at the same, how each woman wants to play her part in the world she is in. But not just for herself, but for her fellow sister as well. It is also the reason why I gave them necks that allow their heads to almost lean on each other. A shoulder to carry the world and a chest to rest their heads.

It is an ode to my mothers, my sisters, my cousins and my friends. The women who have always been there in my life. Those whose stories laid the foundation of strength and those whose lives were painted with vibrant colors.