I don’t know why I am attracted to the number 3. Maybe it’s the holy trinity, the number of Matrix movies, the primary colors, the rule of thirds, I really don’t know. But I have noticed that when I work, I tend to work in threes. I think it’s because I read somewhere that it’s the number of the divine or it’s probably because my sister chose 5 and 11 just doesn’t sound like a number one falls in love with, you know and I just read that 3 is the lucky number for Sagittarius so I guess I am on the right path.

It is usually the number in a set of paintings I work on. It is probably because I am exhausted on that idea and not sure what else can be done to extend it…or I just like the fact that it is just three paintings like “Compromise”. 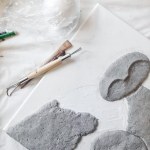 I actually started working on it with one in mind then added 2 more.

The first was of the masquerade forms bending over and into each other. After prepping and drawing my shapes on the canvas, I started layering the forms with my paperclay. I worked quickly over it so that it doesn’t dry out. I do spray water to keep it from drying but not too much as this tends to slow down adding details for me.

Once I was done, I go over the layers and the edges with a styrofoam ball wrapped in cling film to make it smooth and clean out curves, grooves and more. Then I add details into it, do a few more touch ups and let it dry.

After seeing what my my sketch was like on a bigger surface, I felt like one would be too lonely as it was done on a 14″ by 14″ inch

canvas. it also felt incomplete. So I sketched out two more with differences in them and like what I saw. The second was for both forms to back each other and the third was for them to look like they had agreed on something or in balance with each other.

I let them dry for a few days then worked on painting them. I gave the background a wash of warm colors because the masquerades were painted black. I wanted them to stand out of the canvas and also give the details the contrast they needed to be seen once I gave them colors as well.

When I first started working on Compromise, I was targeting a colorful set of forms that seem to just be dancing. But once I was done, it felt more like one was suppressing the other, bending the other’s will to take more space because it feels like it can. They seem to think they don’t have much in common with each other but how can they when they can’t see what makes both of them unique. And I felt like that made the story incomplete. As much I hate to admit it, I always prefer a happy ending or at least, everyone getting what they deserve, justice for all, karma coming full circle. which was why I made the other two.

The second one depicts both of them, now on the same level. No one is occupying or suppressing the other. However, with

their backs touching, it shows that both are not ready to listen and they have come to a stalemate. But better that than suppression and the occupation of another’s space.

And the third, I guess the third speaks for itself. Compromise. Their heads face each other, tilted the way you do when you don’t want to miss what the other is saying. They see each other, they notice that they have the same colors, same forms, just different in order. The differences make them more intertesting as one does not overshadow the other. There is respect of space, acknowledgement of form and acceptance of differences. 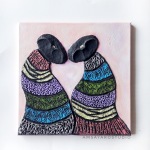 Maybe that is why I feel the connection with the number 3. There is always the beginning , the middle and the end. And Compromise does that for me.